Waking up to a flood of sunshine this morning, I knew it was going to be a good day. Sun, birds, buds – clearly it is spring! Of course, I’m ignoring the fact that I now live in the UK. Nevertheless, my inner optimist decided that a nice floral dress would be warm enough. Add a leather jacket as a precaution and we’re good to go.

My sister and I planned to meet at Brixton Tube Station at 10am, which quickly turned into the Brixton Starbucks at 10:30ish. As it turns out, Starbucks can be a relatively comforting refuge from uncomfortable street-harassment.

Coffee in hand, we set off towards Brixton Village market. Here’s a helpful tip for future London expeditions: nothing opens until at least 11am. 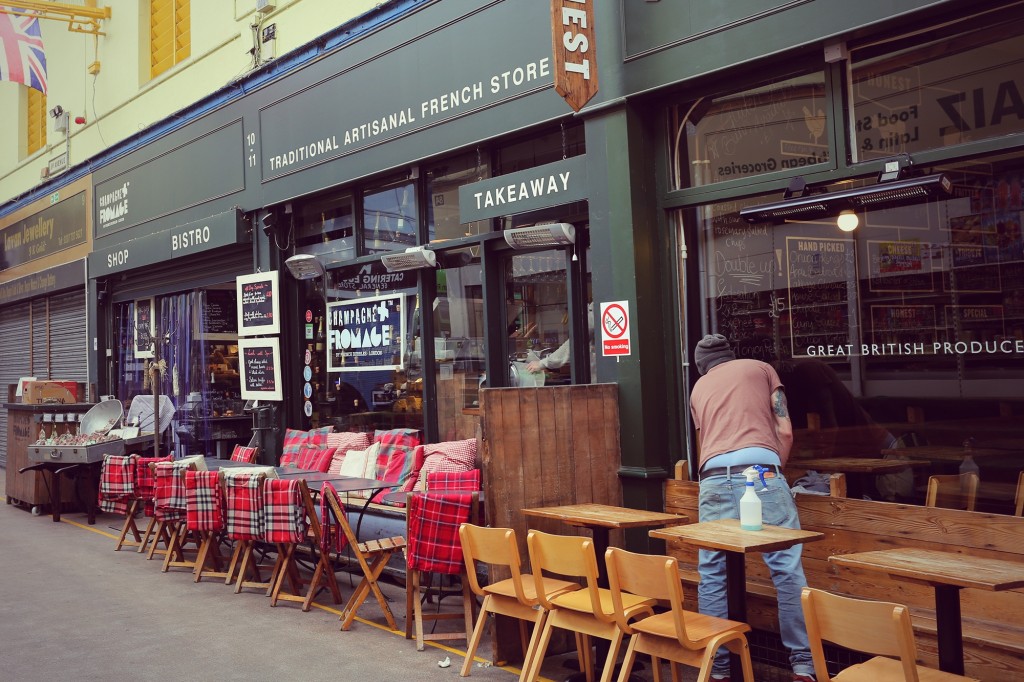 The market was almost entirely closed, except for one lonely pancake shop. Instead of milling around, we decided explore the neighbourhood while chatting over the houses, pets & amazing achievements of a few British YouTubers.

At this point, I introduced Katherine to the new viral app on the block: Meerkat. We shared our walk back with 12 souls from around the world (thanks for joining us, Meerkatters). 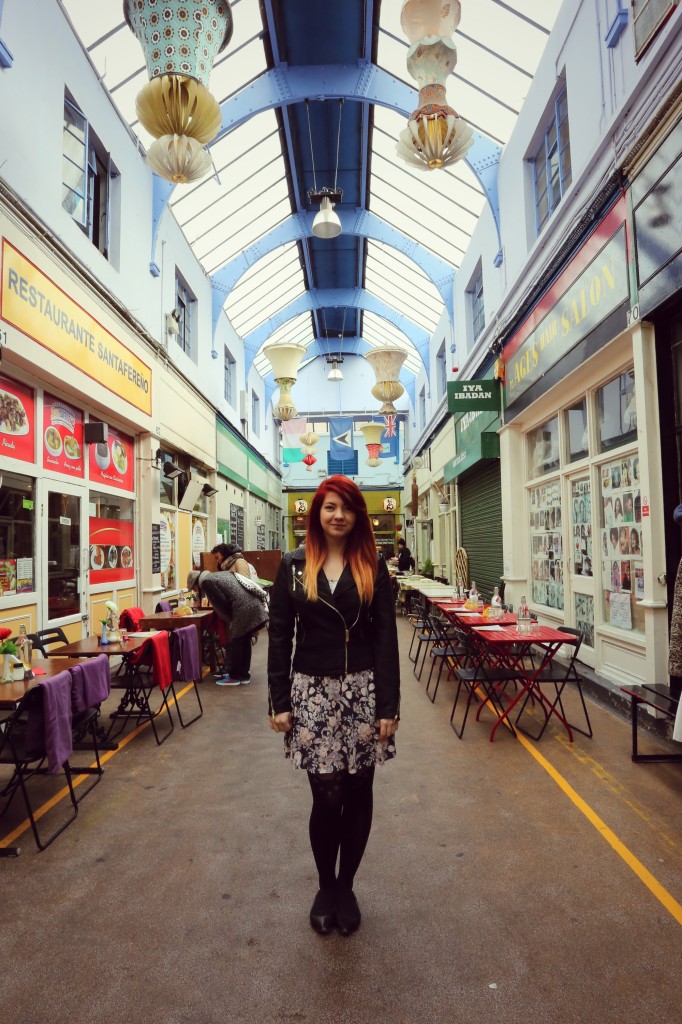 Luckily, by the time we got back there was a bit more life in the market. (Although, admittedly, not much). Side note: I sound like I’m complaining, but quiet in London is actually a rare and cherished treat.

Between the British burger restaurant with the mouth-watering onion rings, the French restaurant boldly advertising Champagne & Fromage, the Oyster Bar next door to the fishmonger, the Jamaican Jerk Chicken hotspot, the fragrant North African restaurant boasting Harissa Bloody Marys and the greengrocer with the endless variety & the world’s largest onions, there’s quite a selection. 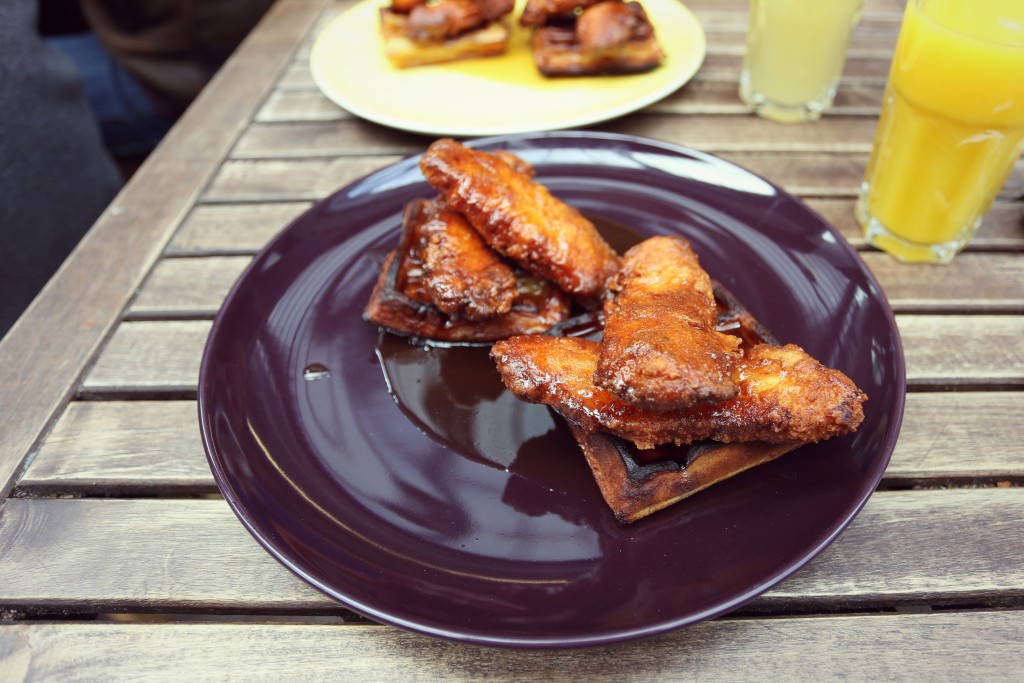 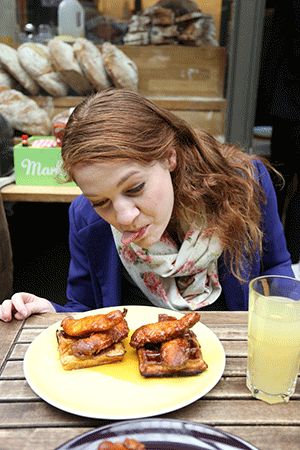 Sidebar: The only other time that I’ve encountered Chicken Waffles was in Las Vegas, earlier this year. There, the waffles were bigger than my face and had bacon stuffed inside them. They call that place Sin City for a reason. 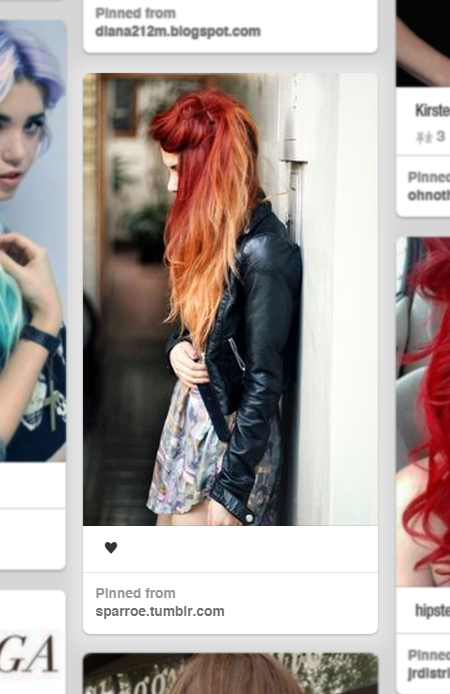 So about two years ago, I pinned a pin. We all know how these pins are all pinned with good intentions, but usually never amount to anything. Either that, or they end up as epic Pinterest fails.

This is the pin in question →

Glorious flaming ombre hair with a badass leather jacket and a nice floral dress. I love it.

My hair has been red since 2010, and I’ve been lightening the tips for the last two years (obviously after I saw this amazing pin). But I haven’t owned a leather jacket – that is, until now.

Kat & I jumped at the opportunity to recreate this photo while we were in Brixton, considering how perfect the circumstances were.

Without further ado, I present: 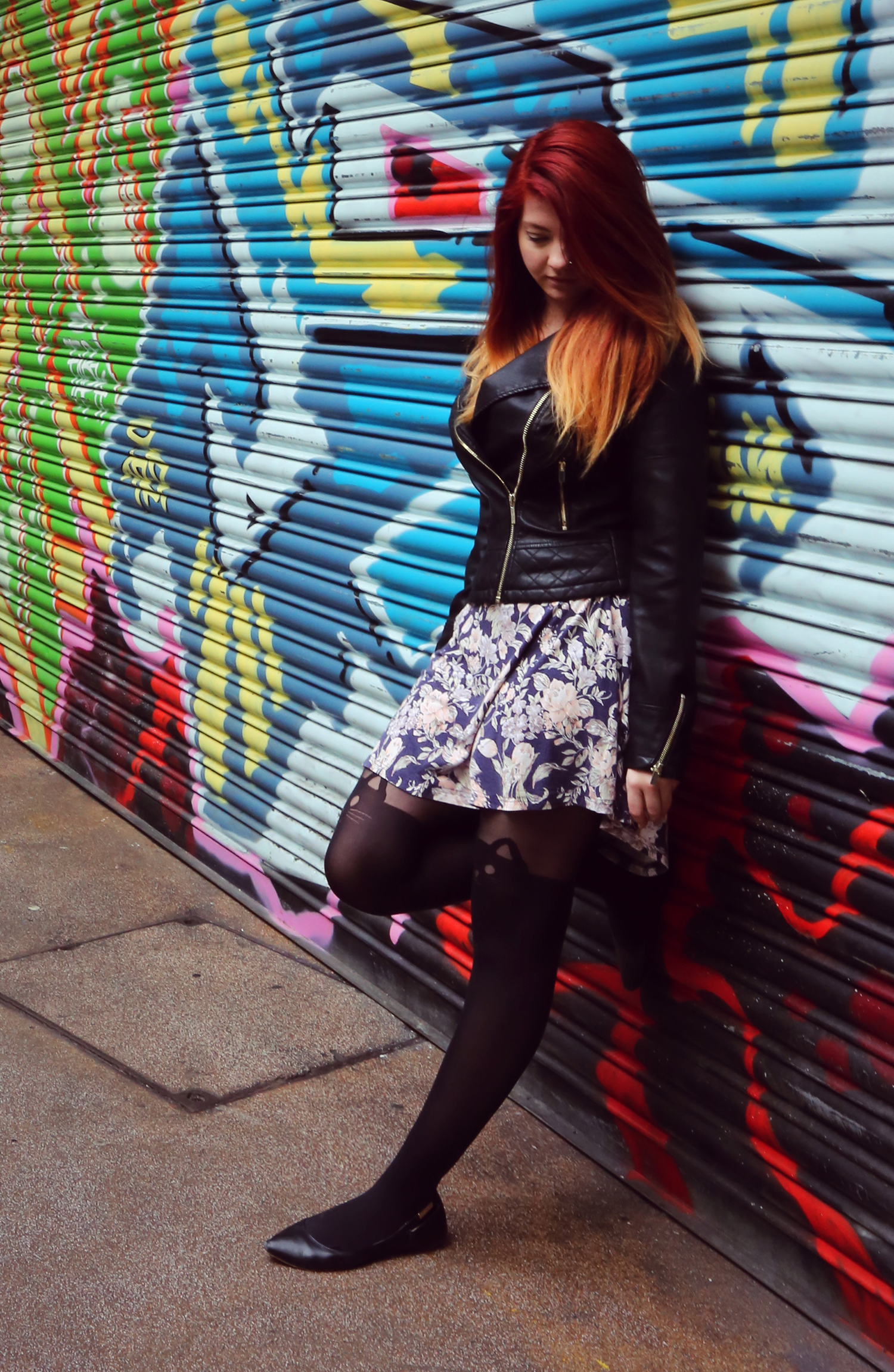 Kat & I were done in Brixton, but not quite done with the day. We had originally planned to go and explore Greenwich. It’s a part of town that neither of us have been to, but both wanted to see. We’ll have to put this one into the bank though, because we ended up at Victoria Station instead.

When in central London, one thing often leads to another. Suddenly we found ourselves outside Buckingham Palace. It’s a glorious spot for people-watching. Better still was the glorious (albeit intermittent) rays of sunshine that peeked through the clouds. 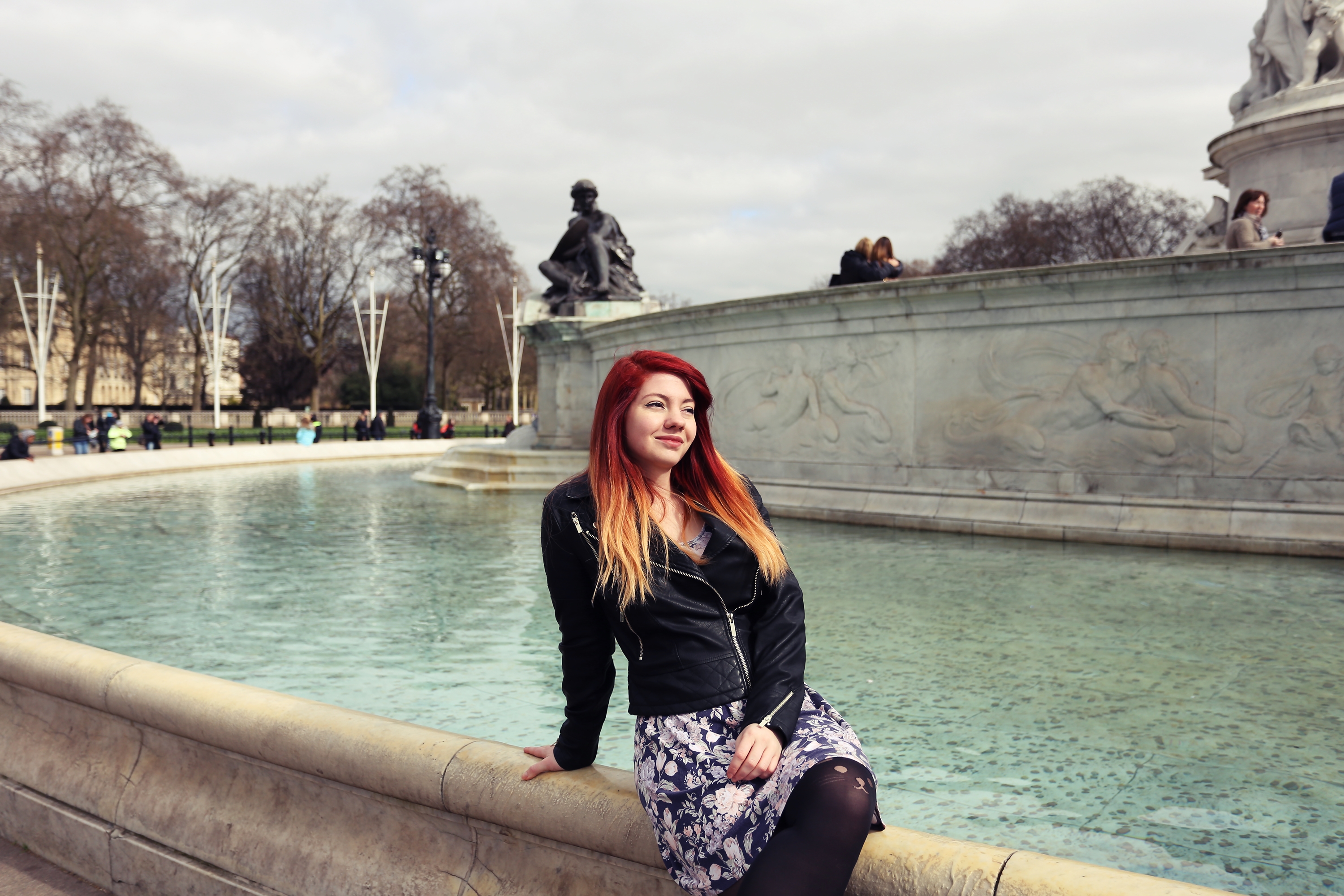 After some Meerkatting and an awkward encounter with some pigeons, we strolled through to St James Park. 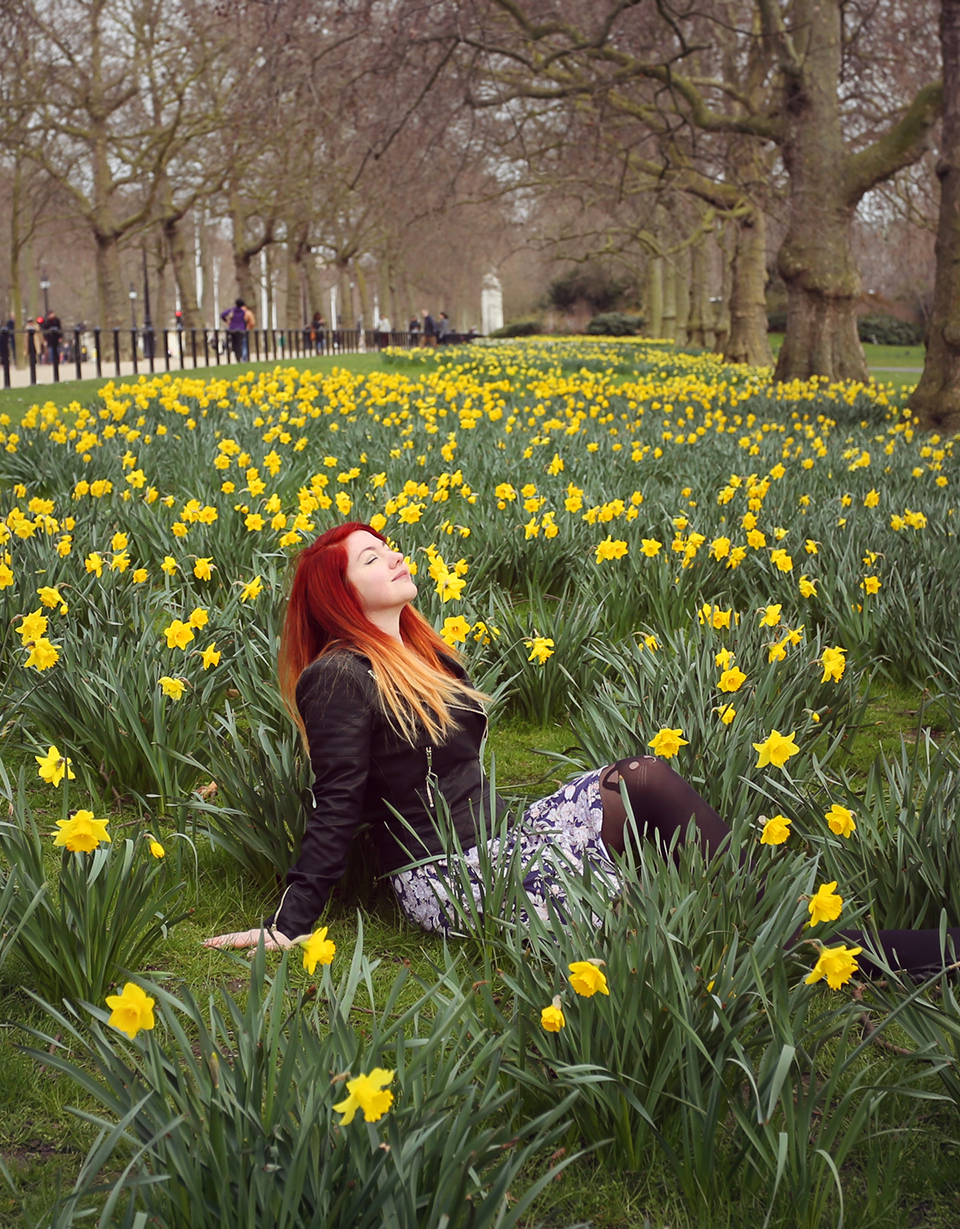 Words cannot do these daffodils justice. It’s as though the Earth is waking up, taking a deep breath and stretching out the limbs that haven’t been properly used for a short while. There’s nothing, and then suddenly, BAM! Spring is here and there are daffodils everywhere. This is my first UK Spring so I have hyper-awareness of the changes.

I’m really enjoying this season particularly for that reason.